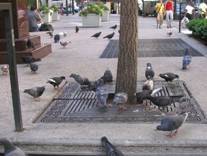 The problem caused from pigeons swarming in urban areas, due to the almost non existing natural enemies, tends to be a real plague.
This problem is obvious also in many Greek urban areas. According to the relative bibliography, pigeons are classified as “urban pests”, together with rats and roaches and given, thus, the nickname “flying rats” (expression used, for the first time, by London mayor). They nest everywhere they can find shelter, food and water and it is very difficult to get rid of them.

The problems caused from their existence is mainly due to the fact that they gather in large numbers.

Droppings found everywhere, create a negative impression (the impression of a filthy, neglected and foul smelling place) for the infested area, which is not only a matter of “aesthetics”. The noise created by the birds is also disturbing. One of the main reasons of discomfort, concerning pigeons’ presence, is the damage caused by the corrosive action of the droppings.

Window ledges, balconies, roofs, monuments and cars are the most common “victims”. It has been reported that the life of a roof might be shortened by half, if it becomes a pigeon swarming place.
Their presence, in some cases, has to do with pathogenic infections to humans like Cryptococcus or Istoplasmosis and also with other diseases like psittacosis, some kind of pneumonia, etc.

Get rid of the Problem